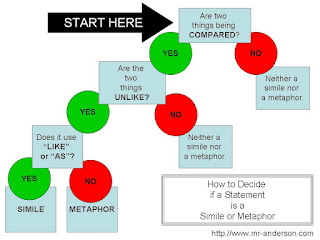 Confession time: I have the hardest time remembering what makes a simile, metaphor, or analogy. I'm like a child who has to be reminded over and over again to wash his hands before dinner. See? What was that?
Maybe it's one of my weird character flaws. Like how I punch people in the arm when I have an idea. If you're one of those writers who always remembers the definitions, I'm as jealous as a headgear-wearing girl on prom night. Whoa! Another one :/
I'm hopeful that even though I don't always remember the definitions, it'll be ok as long as I use them correctly. *fingers crossed*
Here's a brief reminder for those of us who need it:
Simile
A figure of speech in which two essentially unlike things are compared, often in a phrase introduced by like or as (brave as a lion, crazy like a fox, or this one from my son, "High school is like life--it's what you make of it" )
Metaphor
A figure of speech in which a word or phrase that ordinarily designates one thing is used to designate another, thus making an implicit comparison ("a sea of troubles" or "all the world's a stage" or this one from my son..."that dirt bike's the bomb"). Just for fun, check out In Praise of the Bad Metaphor.
Analogy
Similarity in some respects between things that are otherwise dissimilar. Some analogies are similes, and some are metaphors. Need examples? Click here or here.
Will I finally remember these definitions? I'm as hopeful as a football player on game night!
Make me green with envy--do you always remember what's what? And what's your favorite analogy? Mine's from Water for Elephants (...smashed his head like a watermelon). What an image, huh?
photo credit
Email ThisBlogThis!Share to TwitterShare to FacebookShare to Pinterest
Labels: analogies, metaphors, similes, why can't I remember?, writing