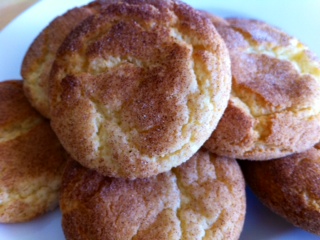 (Snickerdoodles I made for my twins' 13th birthday party!)

A good friend of mine shared her easiest sugar cookie recipe with me. I added a twist to those cookies, rolling them in cinnamon and sugar and calling them snickerdoodles. When my fifteen-year-old son was in kindergarten, I started bringing the snickerdoodles to class parties. They became...dare I say it?...legendary. My son loved how it was his "thing."

When other moms asked for the recipe, my son's first reaction was to ask me not share it. His fear was that other moms would make the cookies for class parties and play dates, and his snickerdoodle world would turn upside down.

But I shared the recipe anyway. I mean, what if my friend had never shared the recipe with me? And you know what? It's still my son's thing. Yes, other moms made the snickerdoodles. And his friends-who-are-girls made them. But they took photos of themselves baking the cookies, and then posted them on Twitter and Facebook, tagging my son. Sharing the recipe didn't take anything away from him. It added to the fun.

I've noticed the same tendency with some successful writers. They don't hoard their wisdom, refusing to share what they've learned on their personal writing journeys. They don't hold tight to winning advice, fearful that a newbie writer will knock them out of the publishing world. Instead, they write craft books, blog and tweet about writing tips, and even critique pages.

I'm so thankful for them.

Here are some of my favorite successful writers who share their literary recipes:

I could go on and on, but those are my top three. Can you add to the list? Any successful writers you can think of who share their literary recipes? Mention them in the comments, along with their links!

Mix all three ingredients. Roll into 1" balls, and space 2" apart on a cookie sheet. Bake at 375 degrees for 6-8 minutes. For snickerdoodles, simply roll the dough in a cinnamon/sugar mixture before baking.