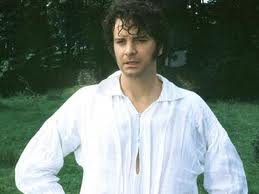 My husband and sons were gone on a scouting trip this past weekend. In their absence, I got lots of writing done, but can you guess what else I did?
a. Frolicked at clubs late into the night
b. Threw a wild party at home until the cops broke it up
c. Watched Pride and Prejudice, in my jammies, for the 112th time
No contest--Mr. Darcy will always win. My favorite is the Colin Firth version...tall black boots, breeches, the damp white shirt clinging to his skin after he swims in the lake...
Now where was I?
Ok, this time my indulgence was work-related. Seriously. I'm studying unlikable characters, and although Mr. Darcy is one of my favorite characters of all time, he starts out as a real jerk. This time I paid close attention to how the lovely Ms. Austen turned a real cad into the dreamboat we know and love.
When we first meet Darcy, here is how I'd describe him:
We don't feel this way for long, though. Austen provides little nuggets early on, which helps the reader/viewer question this original impression. We learn from others that Darcy is a loyal friend to Bingley, and that he's devoted to his little sister, Georgiana. He can't be all that bad, right?
And then Elizabeth Bennet throws him off his game. She doesn't cling to him, trying to catch his attention. Instead she's independent, opinionated, and she laughs at him. She doesn't like Darcy at all, and this tilts his privileged world off balance.
Darcy falls in love with Elizabeth, but when he pronounces this love, he botches it. Big time. We feel sympathy for him, especially when Elizabeth rejects him. And as the story unfolds, we learn the following about Darcy:
So there you have it--my thoughts on how Darcy goes from bad to rad at lightning speed. Do you have a favorite unlikable character? And if you're a fan of the Pride and Prejudice movies, which version is your favorite?
photo credit
Email ThisBlogThis!Share to TwitterShare to FacebookShare to Pinterest
Labels: I love him, julie darcy--how does that sound?, Mr. Darcy, pride and prejudice, unlikable characters