Writers, are you running in circles? 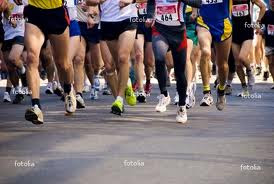 Do you ever feel like you're running in circles? Like you're stopping at the same Gatorade stations and passing the same landmarks without gaining any traction? Well, me too.
Maybe it's because we're so focused on what's in front of us--the current rewrite, the plotting snag, or runaway characters. Or maybe it's because something happens that makes us feel as if we're back at the starting line. Whatever the reason, here's what I try to do when I feel like I'm running in circles:
Stop
When we slow down or stop, we're able to see that these landmarks aren't the same after all. Our battle with exposition or telling aren't what they used to be. Our character development is no longer flat and uninspiring. Our skills are improved. Not perfect, but better. With each rotation we're widening our circle and gaining knowledge.
Reflect
We need to remember where we were last week, or last month, or last year. What's happened since then? How have we improved in that short time frame? We may not think it's a lot, but it is. Even if we're still frustrated by lack of polish, representation, or a contract, it's important that we pat ourselves on the back for all that we've accomplished.
Start running again
Once we appreciate our growth, hopefully it'll give us the extra boost we need to keep racing toward that finish line. We can't win if we don't play, so we must guzzle the Gatorade, shake the sweat off our limbs, and run another lap.
Encourage fellow runners
How many times did you feel like quitting until someone shouted at you from the sidelines? That's what we can do for each other. Each runner shares the same worthy goal, and it's fun to cheer each other on as we race forward.
It's easy (and I think normal) for us to get caught up with frustration and worry. But in my opinion, we need to remember that life is short, and to be thankful we're in the race.
Do you ever feel like you're running in circles? And if so, how do you handle it? We could all use some tips!
photo credit
Email ThisBlogThis!Share to TwitterShare to FacebookShare to Pinterest
Labels: improvement, running in circles