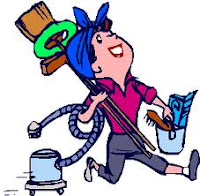 I was scrubbing our bathroom when I got a case of the giggles. I was amused by the lofty impressions I used to have of real writers. While vacuuming dust bunnies, I compared myths vs. realities.
Myth: for real writers, words come out perfectly the first time around.
Reality: blog posts by writers, agents, and editors reinforce the truth that there's no such thing as a perfect first draft, or even a perfect finished product.
Myth: real writers make enough money to hire nannies and maids.
Reality: it's true that some writers are rich, but most are not. There are plenty of writers who clean their own houses and mow their own lawns. It's clear we don't write for the money.
Myth: real writers are snooty and unapproachable.
Reality: from what I've seen, writers from all stages of publication are regular people who are generous with their time, information, and encouragement.
Myth: real writers wear black turtlenecks and berets, and sip espressos while spouting big words.
Reality: real writers--they're US. They're hard workers who toil at the day job, then come home and add words to the wip. They write while the baby's asleep. They shuttle kids to and from school. They coach little league and soccer. They work on manuscripts during their kid's volleyball or track practice. They're passionate people who show up at the page, whether they're inspired or not.
Did you think real writers were glamorous? Which writer's myths have you debunked?
photo credit
Email ThisBlogThis!Share to TwitterShare to FacebookShare to Pinterest
Labels: real writers, writing myths