Three ways to give your characters True Grit 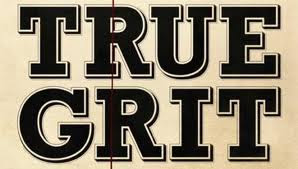 So I've been thinking a lot about characters lately, and studying ways to strengthen them. I dove back in to Revision and Self-Editing by James Scott Bell, and was reminded of his summary of three characteristics that make great characters, the first one being grit.

He says the first unbreakable rule for major characters in fiction is No Wimps! Characters can start out as wimps, but early on they must develop grit and do something. Grit must be shown in action.

If our story is dragging, Bell suggests looking at the heart of our main character. Is she acting like a wimp? Is she "taking it" without doing anything about it? Courage bonds us with lead characters, so here are some ways Bell suggests we put some fight into the people we've created:
If you need help getting to know your characters better, Jody Hedlund's character worksheet is a great place to start.

Do your main characters have grit? Or do they start out wimpy and grow from there? I'd love to hear about them.