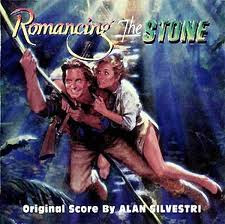 Recently I watched Romancing the Stone for the umpteenth time. It's a story about a romance writer who lives alone with cats crawling all over her house.
When she finishes a manuscript she pops open a bottle of champagne and shares it with her feline family. Soon the writer is launched into an adventure of her own, and falls in love with the rugged hero--someone who resembles the hunks of burning love she creates. *sigh*
Same with Nim's Island, where a panicky author is thrust into a crazy adventure to help find and save an 11-year-old fan and her (hunky) scientist father. *sigh again*
If I were dropped into a story, I'd want it to be in The Proposal. You know, the chick flick with Sandra Bullock and Ryan Reynolds. Not that I'm obsessed with Ryan or anything, because my husband is awesome. OMG RYAN REYNOLDS!!!

I'd love to be the main character in that movie for a few reasons. She wears amazing clothes, carries swoon-worthy bags, and best of all...she's a book editor! Yep, she has the power, people. She reads books and decides what is or isn't published. I'm sure that's a heck of stressful job, but wow, what a feeling. Plus, Ryan Reynolds is her assistant! But remember, I'm not obsessing.
So writers, let's have some fun. Would you rather be dropped in your own story as one of your characters, or into someone else's creation? Which character would you choose, and why?
photo credit
Email ThisBlogThis!Share to TwitterShare to FacebookShare to Pinterest
Labels: characters, romancing the stone, ryan reynolds is a god, the proposal