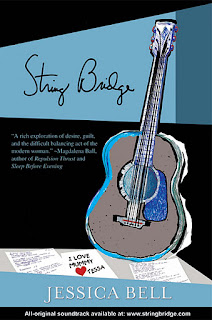 I recently finished "String Bridge," which was written by our fellow blogging buddy, Jessica Bell. The beautiful story, with all it's twists and turns, is still on my mind. Here's a brief description from Amazon:
Greek cuisine, smog, and domestic drudgery was not the life Australian musician, Melody, was expecting when she married a Greek music promoter and settled in Athens, Greece. Keen to play in her new shoes, though, Melody trades her guitar for a 'proper' career and her music for motherhood. That is, until she can bear it no longer and plots a return to the stage--and the person she used to be. However, the obstacles she faces along the way are nothing compared to the tragedy that awaits.
What I loved most about this book was how textured and real these characters were. Melody, Alex, and Tessa became real people to me, and I cared about what happened to them. Tessa, Melody's daughter, was a spirited little girl who added comic relief to the serious story, and provided a compelling reason for Melody to stay in her current life. Alex was the hubby I wanted to smack across the head while at the same time make him a sandwich. Their family life was complex, and there were no easy answers to their problems.
Most women can probably relate to Melody's feelings of love, loss, and regret. She compared the life she thought she'd live vs. reality, and experienced days when she didn't quite measure up. The author captured these emotions beautifully, and without giving anything away, she also did an amazing job of throwing in some wild twists. Like the ending...I didn't see it coming, and I absolutely loved being surprised.
Have you read Jessica's book? If so, what did you think? And if you haven't read it yet, here's where you can get a copy:
Amazon
Amazon UK
The soundtrack is on iTunes and Amazon
Jessica can also be found on Facebook and Twitter
Bio:
Jessica Bell is a literary women's fiction author, poet and singer/songwriter who grew up in Melbourne, Australia, to two gothic rock musicians who had successful independent careers during the 80's and early 90's.
She spent much of her childhood traveling to and from Australia to Europe, experiencing two entirely different worlds, yet feeling equally home in both environments. She currently lives in Athens, Greece and works as a freelance writer/editor for English Language Teaching publishers worldwide, such as HarperCollins, Pearson Education and Macmillan Education.
In addition to String Bridge, Jessica has published a book of poetry called Twisted Velvet Chains. A full list of poems and short stories published in various anthologies and literary magazines can be found under Published Works & Awards on her website.
From September 2012 Jessica will be hosting the Homeric Writers' Retreat & Workshop on the Green island of Ithaca, home of Odysseus.
Email ThisBlogThis!Share to TwitterShare to FacebookShare to Pinterest
Labels: Jessica Bell, String Bridge