Dude! Details from a skate park! 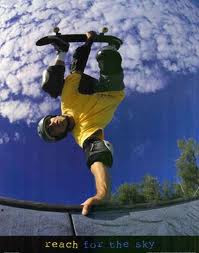 Last week I took our three sons to the skate park. It was a gorgeous So Cal day, and while the boys did their thing on the ramps and half-pipes, I sat with my trusty spiral notebook and jotted down setting details. If you write for middle graders or young adults, these scene details may come in handy. Here are some of my observations:
The Setting
The Toys
The People
Have you ever visited a skate park? If so, did these scene details sound familiar? And do you ever jot down scene details when you're out and about?
photo credit
Email ThisBlogThis!Share to TwitterShare to FacebookShare to Pinterest
Labels: middle grade, scene details, skate park, writing, young adult