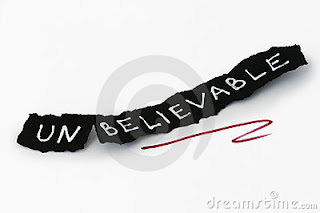 My sister and I sat in the front row of a packed theater, watching Mission Impossible. During one scene, which involved a speeding train, a narrow tunnel, and Tom Cruise's strong fingers, my sister cried out, "Oh, come on!" She just couldn't help it. The movie had morphed from entertaining to completely unbelievable.
Another example of unbelievable? Los Angeles firefighters on television and in movies who rush into burning buildings without wearing their breathing apparatus. It doesn't happen that way, as my firefighter husband will tell anyone within listening distance.
Believability matters to most people, and I learned a big lesson in this recently. I wrote the first draft of my current wip after doing light research. I reached a point in the story where the plot relied on a certain police procedure with juveniles, but I didn't stop to research it thoroughly.
After the second draft, I knew I needed to confirm this procedure with an expert. I emailed a police officer friend with a list of questions, and promptly learned I had made a big boo boo. The way I wrote a certain plot line could not happen the way it was written.
What's a writer to do? Well, I could have tried to bend the law to fit my story, but why? If I'm striving for believability, I'd lose it for sure. I chose to re-write the last thirty pages of the manuscript.
Here's what I learned from my blunder:
Mistake #1
If a plot point depends on an official procedure, stop and ask an expert before traveling down the wrong road. Had I fired off a quick email to the police officer at this point in the first draft, I would have saved myself a lot of trouble.
The Solution
For several days, I brainstormed alternate plot points. I wrote them down, followed threads to the end, and then chose my favorite. I'm still in the process of re-writing those final pages.
Mistake #2
Rules of law differ between adults and juveniles, and vary depending on jurisdiction. Los Angeles, New York, Chicago. City, county, state. We can't assume the same rules in Los Angeles County apply to Los Angeles City.
The Solution
When reading through the second draft, I created a list of plot points that should be discussed with a police officer. And not just any officer. My story takes place in the city of Los Angeles, so I relied on an LAPD officer.
Mistake #3
Sure, there are certain plot points that could happen, even if it's only on leap year days at the turn of each century. But that doesn't mean it's likely. In my opinion, bending the law to fit my story would chip away at my credibility.
The Solution
Just because a plot line is believable, doesn't mean it has to be predictable. Hopefully my solution surprises the reader, just like it surprised me. And hopefully when others read it, they won't say, "Oh, come on!"
Have you ever followed a plot line, only to realize it couldn't happen the way it was written? How did you solve the problem?
photo credit
Email ThisBlogThis!Share to TwitterShare to FacebookShare to Pinterest
Labels: believability, bending the law, experts, research, writing