Writing lessons learned from THIS BURNS MY HEART 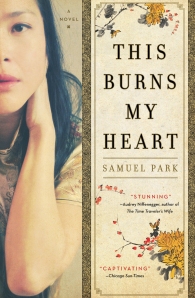 I won This Burns My Heart, by Samuel Park, on Sarah Skilton's blog, and enjoyed it every bit as much as I thought I would. From the reading group guide:

Set in South Korea during the 1960s, This Burns My Heart centers on Soo-Ja, an ambitious young woman who finds herself trapped in an unhappy, controlling marriage. She struggles to give her daughter a better life and to overcome the oppression of her husband, while pining for the man she truly loves. Ultimately she must make her own way in a society caught between tradition and modernity.


Here are some writing lessons I learned from this book:


What do you think of these writing lessons? Do they ring true for you? And have you read a book which highlighted a different culture? What cool things did you learn?