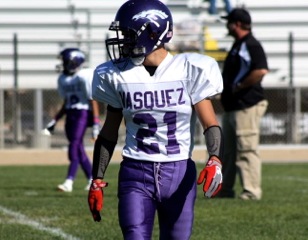 My family loves water skiing, but last summer our sad little boat had to be towed off the water. My super mechanical hubby fixed it this summer, and we were ready to spend a week at the lake cutting the wake and baking in the sun.

Fifteen-year-old-football-playing-uber-dedicated-son said, "Mom, I really want to wakeboard, but I can't spend a week at the lake." *gasp* "I'd miss football practice, and I don't want any of those guys getting better than me."

Um, ok. I tried reminding him that hey, it's "only" high school football, and it's "only" a few missed practices (I know, I know, that's terrible). But no. He's passionate about football, and he's willing to sacrifice a week of wake-boarding for the reward of a starting position on the gridiron.

Just when you think you know it all, a 15-year-old football playing sophomore teaches you a thing or two. I had to take a step back and truly admire his fierce commitment to the game and to his team. It reminded me that if we're dedicated, focused, and passionate about what we love, we'll also reap rewards.

My son not only goes to each practice, but he practices after practice. He shows up early and runs. His asks my hubby to throw the ball for him because he knows "stone hands" is one of his weaknesses.

Just like if we're writing, or thinking about writing, or plotting in our head while we're driving, or setting aside the bank statement to scribble notes about character, we're passionate about what we're doing.

In the Big Thing called Life, giving up lake time isn't such a big deal. But for a 15-year-old, it's huge. Same with missing social events because of practice.

As writers, if we're spending every spare moment writing, if we're sacrificing brain cells, or sanity, or family time, or friend time, or *gasp* TV time, we want that sacrifice to pay off. And it will.

Before last year, my son had never played football. Ever. By the time the season began, he started every game. The coaches played him on offense and defense. His determination and winning attitude made him valuable.

Some writers receive a quick burst of reward. For others it's slow and steady. Each of our writing milestones, no matter how small, are rewards and worth celebrating. The positive comment on a critique, the acceptance by an online ezine, the requests for fulls and partials, and good golly, representation by an agent or acceptance by an editor, or self-pubbing and having loyal and engaged readers. These are all rewards which make the passion and sacrifice SO worth it.

I'm thankful my son has taught me yet another lesson: Give it all you've got, be willing to sacrifice, and reward will follow.

If you have kids, are they super passionate about something? Does their passion sometimes get in the way of what you want to do? And do you celebrate each writing milestone, knowing your passion and sacrifice paid off?
Email ThisBlogThis!Share to TwitterShare to FacebookShare to Pinterest
Labels: high school football, passion, reward, sacrifice, wish I was on the lake right now, writing