The Benefits of Clunkers 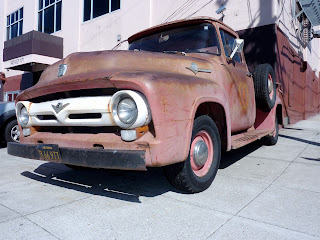 My hubby and I both come from large families, five kids each, and when it was our turn to drive, we drove the cars that had been handed down from older brothers and sisters. I was grateful for the car because it allowed me to putt around town on my own, and gave me some independence at 16.

My car wasn't bad at all. It was a cute little VW Bug my older sister had bought and my parents then bought from her. But it wasn't my dream car, and it wasn't mine.

My now hubby, but boyfriend at the time? His cars deserved their own special names. An old Cougar was called the "Bondo Mobile," because there were bondo patches all over the body. We named an old El Camino the "Leak Mobile," because water dripped through when it rained. And another car of undetermined make was affectionately named the "Kitty Litter Mobile" because it smelled like kitty litter. Let's just say I didn't fall in love with my hubby because of his slick cars.

At the time I would've loved a brand new fancy car. What teen wouldn't? But I'm so glad my parents weren't in a position to give that to me. If we're given something without working hard for it, or given something brand new without realizing how lucky we are, then we miss an opportunity for ambition and gratitude.

Buying my own car was the very first thing I worked toward once I had a job. I scrimped and saved, and felt such pride when I plunked down my own hard-earned money and drove that new car off the lot. Nothing like it. And I babied that car, washing it once a week and putting the car cover on it each night.

I compare clunker cars to the early stages of our writing journeys. Our firsts attempts at writing may deserve their own quirky names, and probably didn't garner much success. In my opinion, that's a good thing. Those clunkers made us ambitious, and hungry to learn more and become better at our craft. And with each new manuscript we write, we're better than before. And for that we can be grateful.

If awesome writers were awesome from the start, then what would they learn? When they reached success, would they value it as much? Would they be as thankful? Probably not. From what I've seen, awesome writers are so grateful they've reached their goals, knowing it took a lot of hard work to get there.

When I look back on my early work, I cringe. Oh, the things I didn't know. And then I think about what I still don't know, and how I'm going to move to the next step. But instead of being frustrated by those early attempts, we can be thankful our successes are built on a mound of clunkers. Those clunkers can give us an attitude of gratitude as we move from one achievement to the next.

Do you cringe when you look back on your early work? Are you thankful for those clunkers, knowing they brought you to where you are today? And what was the first car you drove? Any funny breakdown stories you'd like to share?