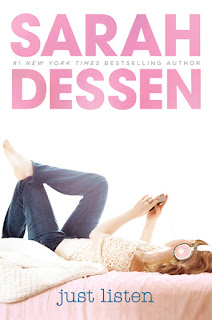 A brief description from Amazon:

When Annabel, the youngest of three beautiful sisters, has a bitter falling out with her best friend--the popular and exciting Sophie--she suddenly finds herself isolated and friendless. But then she meets Owen--a loner who's passionate about music and his weekly radio show, and always determined to tell the truth. When they develop a friendship, Annabel is not only introduced to new music, but is encouraged to listen to her own inner voice. With Owen's help, can Annabel find the courage to speak out about what exactly happened the night her friendship with Sophie came to a screeching halt?

Here are some of the writing lessons I learned from this amazing book:


When I grow up, I want to write books that affect people the way JUST LISTEN affected me. As a reader and a writer, this book changed me.