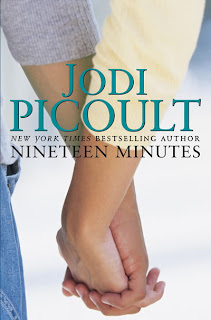 Hey, friends! I hope you're all enjoying your summer. While on vacation, I re-read NINETEEN MINUTES, which was written by one of my favorite authors, Jodi Picoult.

Sterling is a small, ordinary New Hampshire town where nothing ever happens--until the day its complacency is shattered by a shocking act of violence. In the aftermath, the town's residents must not only seek justice in order to begin healing, but also come to terms with the role they played in the tragedy. For them, the lines between truth and fiction, right and wrong, insider and outsider have been obscured forever. Josie Cormier, the teenage daughter of the judge sitting on the case, could be the state's best witness, but she can't remember what happened in front of her own eyes. And as the trial progresses, fault lines between the high school and the adult community begin to show, destroying the closest of friendships and families.

In my opinion, Picoult is a brilliant storyteller. I learned many writing lessons from this book, but here are some of my favorites (Warning! Avert your eyes if you haven't read this book yet and don't want to know any plot points):


Despite the gut-wrenching subject, this book kept me just as riveted the second time around.

Have you read any of Picoult's books? What did you think of these writing lessons?