Publishing a Children's Book: The Large and Small of it 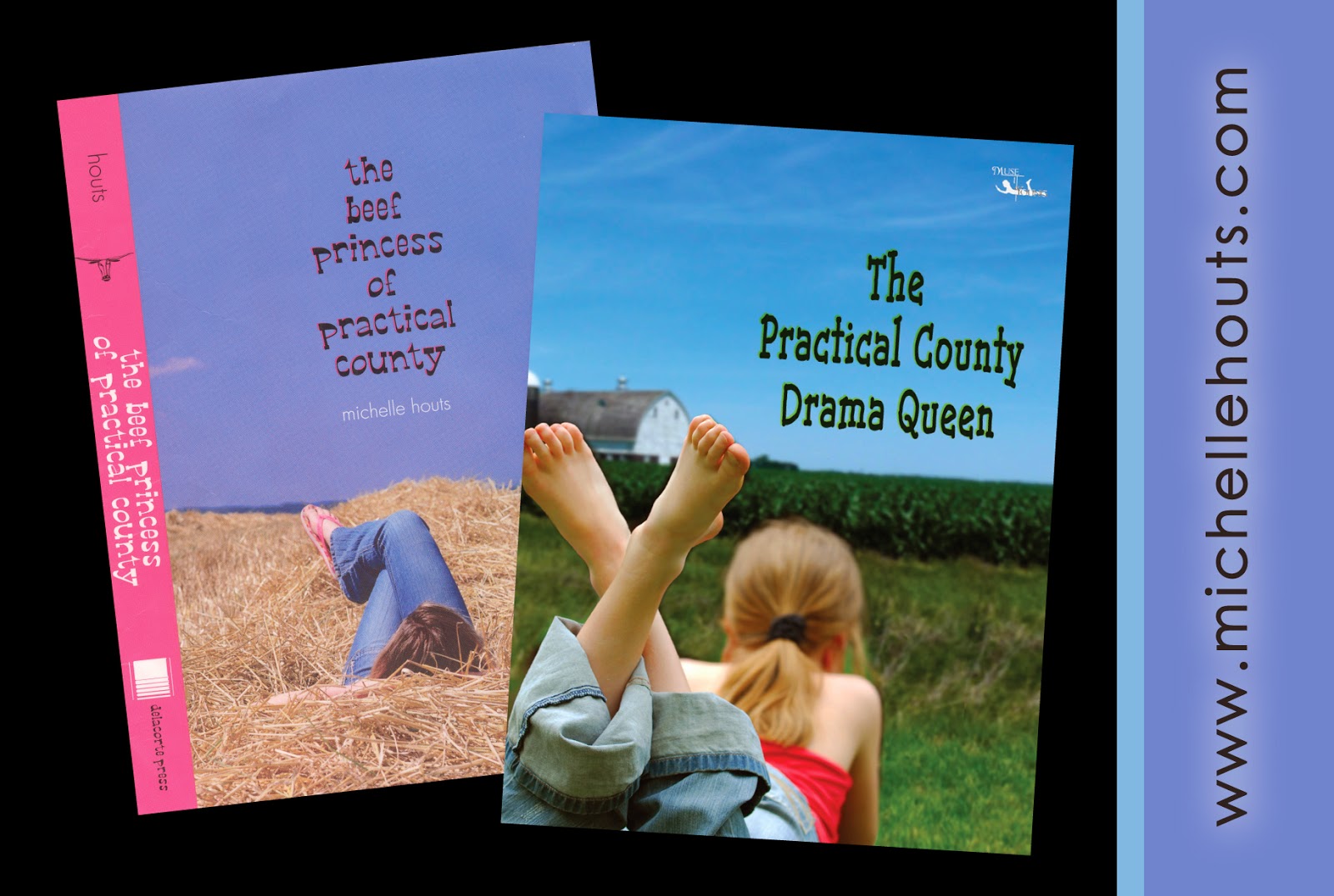 Friends, today we have a guest post by Michelle Houts--one of my agency sisters. As with all of our publishing paths, hers is unique. She's here to share her own experiences with large and small publishers.

Publishing a Children’s Book: The LARGE and small of it
Seven years ago, when I finished my first attempt at contemporary middle-grade fiction, I entered The Beef Princess of Practical County in a major publisher’s contest for unpublished authors. I didn’t win. So, I entered it in another: the Delacorte Dell (Random House) Middle Grade Fiction Contest.. Again, I didn’t win. No one did, actually. It was one of the years they didn’t choose a winner. But shortly after, I got a call saying I was a finalist. And, would I be willing to do some work on the novel and resubmit it?  Uh, sure? Of course! So, Beef Princess was sold to a Random House imprint without an agent on a second try. Not your typical “how I got published” story, I’ll admit.

The Beef Princess of Practical County won a 2010 International Reading Association Children’s Book Award for Intermediate Fiction. It was Nebraska Farm Bureau’s Children’s Agricultural Book of the Year in 2011. Sales were in the tens of thousands. So, it enjoyed reasonable success, right?

Soon, Beef Princess fans began asking for more. (But my editor didn’t.) Young readers said, “You should write another Practical County story!” (Hmm, my editor didn’t.)  School teachers said, “Frannie surely has her own tale to tell!” (But my editor wasn’t asking for Frannie’s tale.) So, I wrote it. And much to my shock and chagrin, guess who wasn’t all that interested? You got it. Random House was not going to publish the sequel. (I know, I know. I’m not the sharpest tool in the shed sometimes.)

After Beef Princess, I landed a fantastic agent, who sold my next middle-grade novel about Danish gnomes at Christmastime (a bit of a leap from cattle farming) to Candlewick Press. That is Winterfrost – due to release 9/9/14. But what about that sequel?  My wonderful agent was determined to sell The Practical County Drama Queen.  But we were met time and time again with this:  It just doesn’t make sense for us to publish a sequel to something we didn’t publish in the first place.

Enter SCBWI – The Society of Children’s Book Writers and Illustrators, an organization I had belonged to for ten years. Their magazine had a story last year on E-First Publishers. These publishers put books out in electronic format first. Then, they may or may not offer a print edition. My agent submitted, and MuseItUp, a small Canadian publisher, offered an electronic AND print contract right away. Frannie’s tale would be told!

The Practical County Drama Queen was released January 31, 2014 in electronic formats. In the spring, it will be released in paperback. So, what’s the difference between publishing with a large, well-known publisher and a tiny upstart? There are several, but first let me say that both fall within the realm of TRADITIONAL publishers. Both are royalty-paying publishers in which the author pays nothing. From there, things can go in different directions.  For example, my advance with a large publisher was many, many times that of a small publisher. My royalty rates, however, are larger with the small publisher, and guess what? There’s no giant advance to earn back before royalties kick in! With a large publisher, I dealt with many “faces” (most of which I’ve never met) in many departments, doing many jobs on my behalf. With a small publisher, there are just a couple of folks who do it all. I got to know them well, and rapport developed quickly. But this also means that without a marketing person and a publicist assigned to my book, I’ll be fronting more of the responsibility.

It’s too early to compare sales, awards, successes. I imagine this title will be a little more obscure in the big book world than its predecessor was. But, it’s published. And, now, when a 4th grader emails to beg for another Practical County tale, I can tell them it’s done!

Thanks, Michelle! It's fascinating to hear about the winding paths of our fellow writers.

Michelle Houts lives and plays on a family farm in Ohio with her three children, the famer of her dreams, some cattle, hogs, a whole lot of barn cats, a few goats and a dog named Hercules. She enjoys reading, cooking and hiking any place that has hills because it is very flat where she lives. An eternal student, Michelle has degrees in special education and speech-language pathology. For more about Michelle Houts and her writing journey, visit www.michellehouts.com.

If you'd like more information about small publishers, check out the guest post by Alex J. Cavanaugh: In the Middle--The Small Publisher Debate.