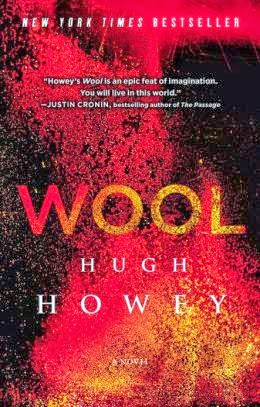 It's been way too long since I've shared some of my writing lessons learned from great fiction! Today I'll gush about WOOL, by Hugh Howey. These notes are based on the omnibus edition of the story, but you can download part one for free here.

First, a brief description of book one:

Thousands of them have lived underground. They've lived there so long, there are only legends about people living anywhere else. Such a life requires rules. Strict rules. There are things that must not be discussed. Like going outside. Never mention you might like going outside. Or you'll get what you wish for.

I've learned some important life lessons from Hugh Howey, like the one I detailed in this post "Are you the Tiger Woods of publishing? Does it matter?" But I also learned amazing writing lessons from his books. (Alert! Read no further if you don't want to know any plot points!)

My kids are on spring break next week, so I'll skip next Wednesday. The next post will be up April 30th--with a special guest!
Email ThisBlogThis!Share to TwitterShare to FacebookShare to Pinterest
Labels: hugh howey, wool, writing, writing lessons learned