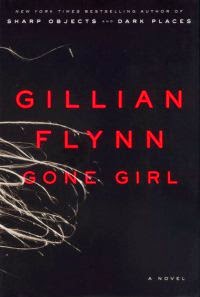 Quick...before the regular post, are you participating in NaNoWriMo? I am! You can find me here.

As you probably learned in my post Unredeemable Characters and Unhappy Endings, I absolutely loved Gone Girl by Gillian Flynn. Like, I'm obsessed. As a reader, I was entertained. As a writer, I was blown away by the author's skill.

It was tough to whittle down the lessons learned to a manageable list, without giving too much away. Fair warning...if you haven't read the book yet, and don't want to know anything about the story, stop!

On a warm summer morning in North Carthage, Missouri, it is Nick and Amy’s fifth wedding anniversary. Presents are being wrapped and reservations are being made when Nick Dunne’s clever and beautiful wife disappears from their rented McMansion on the Mississippi River. Husband-of-the-Year Nick Dunne isn’t doing himself any favors with cringe-worthy daydreams about the slope and shape of his wife’s head, but hearing from Amy through flashbacks in her diary reveal the perky perfectionist could have put anyone dangerously on edge. Under mounting pressure from the police and the media—as well as Amy’s fiercely doting parents—the town golden boy parades an endless series of lies, deceits, and inappropriate behavior. Nick is oddly evasive, and he’s definitely bitter—but is he really a killer? As the cops close in, every couple in town is soon wondering how well they know the one that they love. With his twin sister Margo at his side, Nick stands by his innocence. Trouble is, if Nick didn’t do it, where is that beautiful wife? And what was left in that silvery gift box hidden in the back of her bedroom closet?

What writing lessons did I learn from this book? Too many to list in this post, but here are my favorites:

Have you read Gone Girl? Seen the movie? What's your opinion? What do you think of these writing lessons? Are you participating in NaNo? If so, good luck!
Email ThisBlogThis!Share to TwitterShare to FacebookShare to Pinterest
Labels: gillian flynn, gone girl, i'm obsessed with this book, reading, writing, writing lessons learned