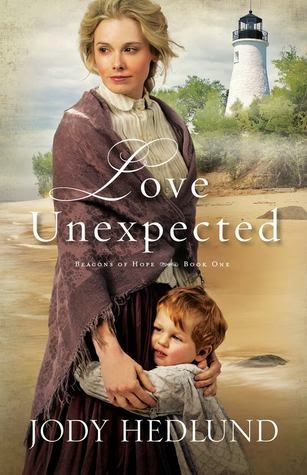 I recently finished another wonderful book by Jody Hedlund--Love Unexpected. In my opinion, there are so many great writing lessons to learn from Hedlund's fiction. I'll share some of them below. But first, about Love Unexpected (from Amazon.com):

All Emma Chambers ever wanted was a home, but when her steamboat sinks just outside Presque Isle, she's left destitute and with no place to stay.

An unlikely solution arises when the lighthouse keeper arrives in town. He's just lost his wife and is having a difficult time caring for his child. So a traveling preacher gets the idea that the keeper and Emma might be the answer to each other's dilemma. After a hasty marriage, she finds herself heading to the lighthouse with this handsome but quiet stranger. Nothing in her aimless life, though, has prepared her for parenting a rambunctious toddler, as well as managing a household.

Emma soon suspects Patrick may be hiding something from her, and then she hears a disturbing rumor about the circumstances surrounding his late wife's death. It seems as if her wish for a home and family of her own could end up leading her once more into turbulent waters.

Here are some writing lessons I learned from this inspirational romance (Alert! If you haven't yet read this story, and don't want to know any plot points, come back to this post once you've finished the book):


Have you seen these writing lessons in books you've read? Have you used them in your own fiction? Have you read Love Unexpected? Anything you'd like to add? Please share!