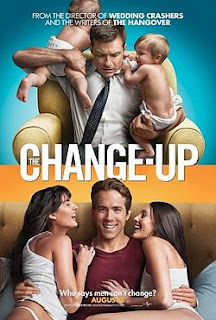 I recently watched The Change-Up, a wacky body switch story. Here's a brief summary from Wikipedia:
Mitch and Dave were inseparable best friends, but as the years have passed, they slowly drifted apart. Dave is an overworked lawyer, husband, and father of three children and Mitch is a single, quasi-employed man-child who has never met a responsibility he liked. To Mitch, Dave has it all: his beautiful wife and three children who adore him and a high-paying job at a prestigious law firm. To Dave, living Mitch's stress-free life without obligation or consequence would be a dream come true.
They get drunk, pee in a fountain, wish for the other life, and BAM! Switcheroo. Ryan Reynolds is my biggest Hollywood crush, so I can look past the predictable premise and constant F-bombs. I can even chuckle at the gross-out humor (I have three sons). But one thing I couldn't get past were the character inconsistencies.
Here's what I mean. *Spoiler Alert* In the end, as expected, the family man missed his family and wanted his old life back. He even volunteered to quit his job as a lawyer. His wife cried when she said, "I don't want you to quit your job. I just want you home for dinner."
Ok Hollywood, that would've worked if the opening had shown a negligent father who never spent time with his wife and kids. But the opening showed a father at home who bathed his twins while his other daughter read him a book. He was laughing and playing with his kids, and his wife was the one who arrived home late.
In one scene, there's even mention of a dinner song. Dinner song? If he's never home for dinner, how is it that they have a dinner song? Hollywood, if I'm missing something, call me!
The silver lining? 1) Gawking at Ryan Reynolds for two hours, and 2) I was reminded that the character arc needs to make sense. Yes? Yes.
Ryan, I still love you. No worries. But now I need to watch The Proposal again so I can get The Change-Up out of my head.
If you've seen The Change-Up, did this bug you? Have you noticed problems like this in any other movies you've seen? And if you have a Hollywood crush, inquiring minds want to know who it is!
Email ThisBlogThis!Share to TwitterShare to FacebookShare to Pinterest
Labels: character inconsistencies, movies, Ryan Reynolds is adorable, The change-up