Have you written The Worst Thing Ever Written? 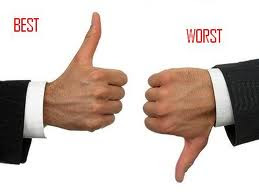 As I revised my manuscript--strengthening character, plucking out repetitive words, and deleting nonsense--I had the feeling I'd written The Worst Thing Ever Written (TWTEW). But it wasn't TWTEW. How do I know?
We've all learned that our original drafts are bad, but probably not as bad as we thought. And as we revise and revise and revise, our manuscripts are no longer The Worst Things Ever Written.
Do you ever feel like you've written TWTEW? (you haven't!) How do you remind yourself that it's not?
photo credit
Email ThisBlogThis!Share to TwitterShare to FacebookShare to Pinterest
Labels: first drafts are laughable, my beta readers are legit, The worst thing ever written, TWTEW